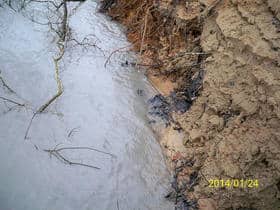 The well water situation in Goldsboro, North Carolina keeps on getting lots of press. That’s probably because a lot of well owners are potentially affected by contaminants coming from a stormwater pipe that ruptured over a year ago at a retired Duke Energy plant.

Following water testing done by a professional lab, the well owners in this area are being told to NOT drink their well water. At the same time Duke Energy is saying any elevated levels of contaminants aren’t coming from them since the ones that would come from coal or coal ash aren’t in that group.

I’m sure the well owners affected aren’t very happy after hearing all of this. It will take years of cleaning up, capping and/or disposing of,  the coal and coal ash ponds in the affected plants.

We sure hope the people who live in and around these areas come out of this ‘clean’ healthwise.

I picked this article out to make a point:

Well Owners Need to “Take Control and Manage the Quality of Their Well Water” !

Most well owners will not have have anyone else making sure their well water is safe unless there is a known breach like the one in Goldsboro. Contaminants could be seeping into their well and they wouldn’t know it.

The great majority of well owners think their water is safe because it looks clear, doesn’t smell, and tastes just fine. The problem with this is that the things that could literally be killing them are not visible, do not smell and have no taste. Some of these contaminants, like pathogenic bacteria, can be harmful in the short term. Others, like some heavy metals and volatile organic compounds, will start to affect the body several years out.

Well owners cannot  stick their head in the sand because everything seems just fine. They need to think like a scientist or water testing lab director—”let’s test, so we really know if we have a problem or not.”

This is the same principle we advocate for well owners. Become your own water doctor and perform an annual water ‘physical’—start now with your first one!

You can read the full article about the well water problems in Goldsboro, NC here: Goldsboro NC Well Water Contamination. 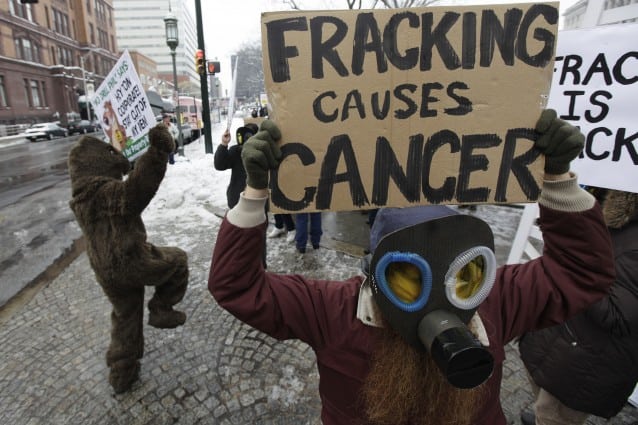 I just read an article on website called ClimateProgress that talks about a research study published on May 4, 2015 in the Proceedings of the National Academy of Sciences. The study showed that well water at three homes in Bradford County, PA contained multiple compounds similar to the mix used by drilling companies.

The study does say that the levels of these compounds were not at unsafe levels. But, the authors of the study are bringing this up to show that despite industry denials, these commonly used fracking compounds are starting to show up in private wells. While the scientists who performed the study admit they cannot, with certainty, say that there is direct connection between the compounds discovered in the well and the nearby fracking wells, they say the types of compounds found in these wells are used in other fracking operations.

This study brings up something we have been saying—check that: “preaching” is a more accurate term—ever since the concerns from well owners surfaced about fracking operations in their area…

“Well owners living in areas where fracking operations are going to take place, or where they are already taking place, need to have their well water tested for a wide range of parameters. These parameters should include metals, heavy metals, inorganic compounds and volatile organic compounds (VOCs).”

In one of the wells tested in this study, a VOC called 2-Butoxyethanol (2BE) was found. It’s a commonly used drilling chemical that is known to cause adrenal tumors in animals (it’s unknown if it causes cancer in humans).

The first test you have done is called the “Baseline Test”. This tells the well owner how their safe their well water is today. Then, on at least an annual basis, the well owner has their water tested again. Each subsequent test report is compared to the baseline and the last test to see if any parameters are starting to either show up or are getting higher readings.

So what does the well owner do if they see there may be a problem?

Well owners in fracking areas should not solely depend on their local authorities to monitor the fracking operations. Normally, they do not test homeowner wells in the area near these operations. They need to take control of managing the safety and quality of their well water.

You can read the entire article by going to this web site:  http://goo.gl/6fCbF8

You can learn more about “Baseline Testing” at dwspros.com/fracking-well-water-test

My Rotary club in Westford MA is working with this group, Water Missions International (WMI), to build a water treatment system in a village in Honduras that will provide clean, safe drinking water to 1200 people. We chose to work with WMI for a couple of reasons: 1) the organization was founded by two Rotarians so they understand the and follow the key principle of “Service Above Self”, and 2) they have managed and worked on many, many projects around the world so they know how to manage a project and they understand how to manage complex logistics.

Right now they are jumping in to directly provide clean, safe drinking water to those in need in Nepal. We urge you to donate to support their efforts. Here’s the link to do that:

“Water Missions International is currently responding to meet the urgent need for safe water in Nepal as a result of the massive earthquake and aftershocks impacting the region. More than 10,000 people have been injured and the death toll has risen above 5,000 as rescue teams are reaching isolated communities outside of the capital of Kathmandu. Over 1.4 million people suffer from inadequate food and water supplies, and the threat of cholera grows each day as a result of unsanitary living conditions.”